We are excited to welcome Baoyi Cai as a summer associate at Kevin Patrick Law. Baoyi Cai is a rising 3L at Emory University Law School. She earned a Bachelor of Law Degree from China. Additionally, Baoyi is fluent in English, Mandarin, and Cantonese.

Baoyi’s work as a summer associate for our trial law firm includes doing legal research, reviewing documents, and drafting pleadings and demand letters for our Georgia personal injury cases. Baoyi is a hardworking associate. She is especially interested in learning more about practicing in different legal fields, like automobile accidents and daycare injuries. As a summer associate, Baoyi also attended one of our personal injury mediations. She learned about settlement strategies and negotiations. 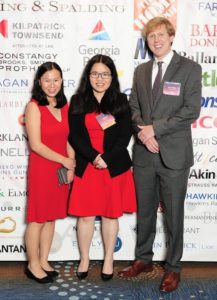 Volunteering at the 2019 GAPABA Annual Gala

Prior to starting as an associate at Kevin Patrick Law, Baoyi has been very active at Emory Law School. Baoyi is the founder and President of the Association of International Law Students. She is an international student representative. Baoyi is part of the diversity and inclusion coalition. Baoyi also won first place in the Duke Transactional Law Competition this March. During the competition, Baoyi worked with her teammates to draft an indemnification agreement for a stock purchase. She also negotiated the agreement with students from other law schools.

Baoyi’s Involvement in the Community

As a summer associate at our firm and during law school, Baoyi always tries to get more involved in the local legal community. For example, Baoyi volunteers at Project Open Hand in Atlanta. The project helps homeless individuals in Atlanta. Baoyi also is a volunteer at the Clinic for Veterans at Emory Law School. She is also an active student member with the Georgia Asian Pacific American Bar Association (GAPABA). She volunteered at the Annual Gala too!

We are glad to have Baoyi with us this summer as an associate at Kevin Patrick Law. Baoyi is a great asset to our personal injury practice. Again, welcome Baoyi!

Get your free Consultation Today